At a Town Meeting on November 6, 1894, voters decided to elect six Library Trustees and appropriated the sum of $25 to secure the gift of $100 worth of books from the State. On December 4, 1894 Ms. Sara Tufts Rockwood became the first Librarian and Chairperson of the Board of Library Trustees. Lucinda Hammond, Sara’s sister agreed to house the Library in her home in a room formerly occupied by the Post Office. 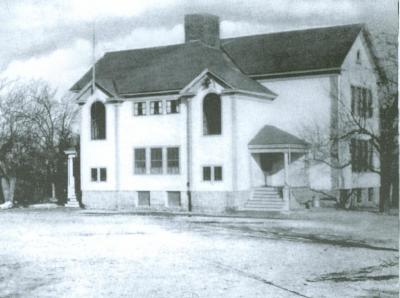 With Sara Rockwood’s resignation in 1905, the Trustees found it necessary to move the library across the street to the Massey (Center) School. The new Librarian, Bertha Franklin, hosted a meeting of the Southern Worcester Library Club in 1907. During the course of her librarianship, she repeatedly urged citizens to register at the library.

At the end of the 1920s, Marie Cook became Librarian. The entire collection was catalogued by the Dewey Decimal System and $10,000 was appropriated to build a library on Common Street.

With Sara Rockwood’s resignation in 1905, the Trustees found it necessary to move the library across the street to the Massey (Center) School. The new Librarian, Bertha Franklin, hosted a meeting of the Southern Worcester Library Club in 1907. During the course of her librarianship, she repeatedly urged citizens to register at the library.

At the end of the 1920s, Marie Cook became Librarian. The entire collection was catalogued by the Dewey Decimal System and $10,000 was appropriated to build a library on Common Street.

On May 15, 1930, the people of Bellingham dedicated the new Bellingham Free Public Library. The Bellingham Grange presented the library with a Hamilton electric clock, which still hangs proudly in the Library’s Historical Room and keeps perfect time. The Children’s Room in the basement was opened in 1966. The Trustees opened the Reading-Reference Room in December, 1977. On October 14, 1978 the room was dedicated to Sarah J. Wrenn, who served as a Trustee for 35 years and died while still in office in 1976.

For budgetary reasons, the Trustees voted to consolidate library services at the Center Library in 1977 by closing branches at North School and Keough School. The decision became effective on July 1, 1978, and a new Library Director; Douglas Rendell started work at the same time.

In 1979, the Library qualified for its first Direct State Aid Grant ($5,422.88) having hired a professional librarian to supervise the operation and maintain minimum standards for book expenditures and library hours.

On May 15, 1980, the Library celebrated its 50th anniversary in the building on Common Street, and in 1981, Ms. H. Perry Coppola replaced Mr. Rendell as Director. Circulation continued to increase and the Trustees utilized all available library space by using both floors of the Library. A Space Needs Study Committee was formed to investigate alternatives, but the recommendation of using the Old Center School was abandoned as being too costly for the amount of new space realized. During this period, Anne Hackett replaced Ms. Coppola as Director. Town Meeting action set up a new committee to investigate library expansion and in 1985 State grant funds the Trustees had been accumulating in a special account were earmarked for a feasibility study and preliminary architectural drawings for a new facility.

Voters endorsed a new Library at Special Town Meeting in August 1987, and a special election in October of 1987 exempted the debt from the constraints of Proposition 2 1/2. A Federal grant in the amount of $252,000 was awarded and was used to defray the cost of the $2.3 million dollar Library, which was formally dedicated on September 24, 1989.

With the opening of the new facility, library usage, programming and circulation have increased.However, due to severe budgetary constraints starting in 1990, staff hours were reduced and the number of hours the library was open to the public was curtailed.

In November of 1994, Laura Einstadter was hired as the new Director, while in May of that year Bellingham adopted a Town Charter. The only significant change to library operations during that period was changing the number of elected Trustees from five to the original six.

In July 1994, the Library petitioned the Massachusetts Board of Library Commissioners (MBLC) to switch from the Eastern Region to the Central Region. It was felt that the demographics of the Central Region more closely matched those of Bellingham and neighboring towns where library patrons went for library materials. Additionally, the Central Region’s serviced offered a wider range of access to information not easily available through the Eastern regional services, such as a bookmobile, book deposits, audio tape deposits, YA and children’s kits. The approval from the MBLC came later that year and the Library became an official member of the Central Massachusetts Region in July, 1995.

During this same period, the Library also asked to become a member of C/WMARS, as an On-Line Affiliate. Membership was granted in November of 1994. Beginning with two ports, then increasing to four ports, as an affiliate member the Library was able to access the catalogs of other on-line libraries, thereby providing an additional service to its patrons. An on-going process of entering materials into the system ensued, with about three quarters of the Library’s 42,000 volumes being online by the end of 1995.

In December, 1994, the Library also celebrated its 100th anniversary with a celebration for both townspeople and elected officials. Many prior Trustees and employees attended the event.

The Library now provides Internet access to its patrons and has increased the number of computers available for research and personal use by patrons. In 1998, the Library became a Full Member of C/WMARS with the eventual change over from a stand-alone circulation system (Winnebago) to a fully online catalog and circulation system (Innovative Interfaces) by February of 2000.

Laura Einstadter resigned her position as Library Director in September of 2000. In November of that year, the Board of Trustees hired Susan M. Peterson as the library’s new director. Susan M. Peterson resigned her position in 2003 and Charlotte Rabbitt began in January of 2004. In January of 2008, Charlotte (Rabbitt) Canelli resigned, and in April of 2008 Bernadette Rivard was named Library Director by the Board of Trustees.

The Trustees, Director, staff and Friends of the Bellingham Public Library continue to work on ways to enhance the quality of library and information service to the community.